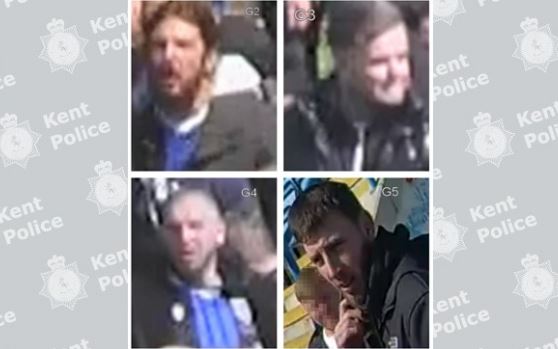 Officers from Kent Police investigating offences committed during a pitch invasion at Priestfield Stadium have released new images of seven people they would like to speak to in relation to the incident.

Four of the people are shown in the main image, with the additional three shown below. We are not sure what is worse, being hunted by the police or having photographic evidence of yourself attending a Gillingham game broadcast to the public?

A large number of supporters ran onto the field of play immediately following the match between Gillingham FC and Rotherham United on Saturday 30th April 2022, with fighting breaking out among some and objects being thrown.

The disorder is being investigated by Police officers who have been reviewing footage from multiple sources and believe those pictured may be able to assist them.

Eight other people have been arrested so far, all on suspicion of public order offences including violent disorder, with three from Faversham, and one each from Rochester, Tonbridge, Maidstone, Gillingam and Sheppey.

Additional enquiries are also ongoing into alleged offences committed by supporters believed to be from outside Kent who entered the field of play from within the Rotherham section of the ground.