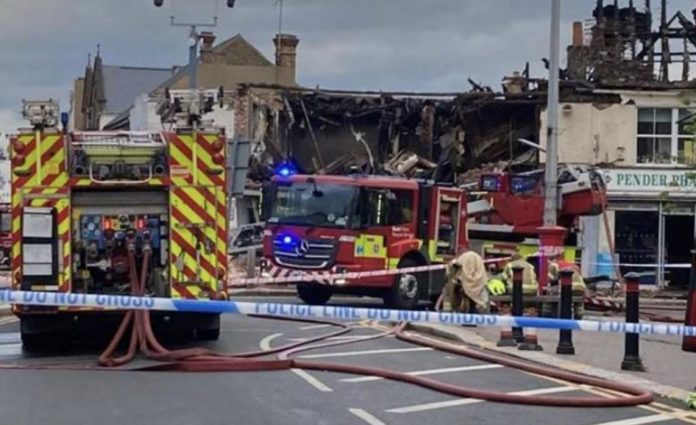 A disused pub called the New Inn in Gravesend High Street burnt down yesterday leaving the building in a precarious condition.

Firefighters were called to the building on the corner of Queen Street and Milton Road at around 1pm, with the roof well alight by then. The building which was used most recently by New Amsterdam – the CBD Specialist vape shop billowed smoke above Gravesend as the fire took hold.

A spokesman for Kent Fire and Rescue Service said: “We were called at 1.04pm to reports of a fire at a commercial premises in Queen Street, Gravesend. Nine fire engines and a height vehicle have been sent to the scene. Crews wearing breathing apparatus are working to extinguish the flames”.

The fire was put out by 3pm although the front of the old pub has since collapsed into the road and there is understood to be damage to adjacent buildings.

The Gravesend one-way system was brought to a stop as fire engines congregated at the scene, with Milton Road closed from just after Edwin Street to the bus barrier at King Street.

Queen Street remained closed overnight whilst firefighters kept watch to make sure the fire did not reignite and to keep the scene safe. An investigation will now take place to establish the cause of the fire.

There has been much speculation as to the cause of the fire. Many ‘sofa experts’ think that it is just ‘another insurance job’ on an old pub, so that a new block of flats can be built at that location. One said “this pub is the ideal location for developers to build flats, it does seem odd that pubs appear to be so much more combustible than other buildings”.

Others were guessing that there may have been a cannabis farm on the upper floors of the disused building which led to the blaze. A few were disappointed that the vape shop had closed before the fire, otherwise there may have been a pleasant smell of cherry and vanilla smoke wafting over Gravesend all afternoon.