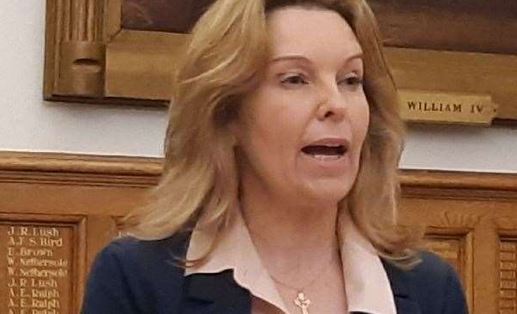 Dover MP Natalie Elphicke has praised the Kent police for their response to an anti-illegal immigration protest at the Port on Saturday. She tweeted her praise for the force, even though the police have now been accused of hospitalising a British Veteran turned activist.

The MP tweeted “My thanks to Gold Commander Ch Sup Nigel Brookes of @kent_police for his diligent planning and effective delivery of an extensive policing operation. I was pleased to join Cllr Nigel Collor and leader Cllr Trevor Bartlett in the @DoverDC operation control room today”.

The Dover MP had already tweeted her unhappiness about a possible protest happening in her district “A protest in Dover in the middle of a pandemic is not a sensible or responsible thing to do. We cannot risk a second wave – protesters should stay away from Dover this weekend. Police resources are better used fighting crime than policing political demonstrations”. Perhaps she should also say that our Police and RNLI are better used helping UK citizens than pulling illegal migrants from The Channel on a daily basis.

However, the MP made no mention of British war veteran who fought for his country who ended up in hospital as a result of police actions. The activist, who goes by the name of ‘Little Veteran’ on social media regularly posts videos from rallies across the UK.

The Little Veteran was forced to go to the hospital Monday complaining of “horrific” injuries after the assault that was caught on video.

Former Brexit Party MEP Martin Daubeny said: “I’m feeling pretty choked right now What kind of country takes the knee to #BlackLivesMatter – a ragbag of anti-British revolutionaries who want to actively abolish the police – then puts the boot into its veterans, who fought for their flag?”

Natalie Elphicke’s most recent tweet, posted late Sturday, said “More people were out and about enjoying our area’s lovely beaches than joining the political protests in Dover today. I am grateful that many hundreds of expected protestors on both sides heeded my call to stay away”.

We do not think it was anything to do with people ‘heeding your call’. Most people probably realised that it had the potential to turn nasty and decided to stay away of their own accord.

Other posters responded to the MP “Nobody listened to or heeded your call. A planned small peaceful demo by anti-racist groups in Market Square took place as planned. Far right extremists blocked the main A20 and fought with police as planned”.

Another said “While more illegals were landing in Dover harbour. Mrs Elphicke is happy to see in her own constituency this happening and has to ask herself why are people protesting…???”

Whilst most people agree that the MP is against illegal immigration, it is actions that count. It is straggering that illegal immigration continues with people entering the UK with no police in sight, yet there is a full riot squad present when required to deal with UK citizens. The UK people would not be protesting if they could see a constant police or border force presence, protecting our shores.