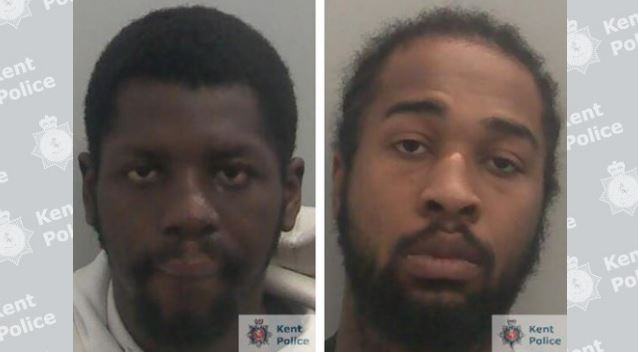 Two men have been jailed following a serious assault in Maidstone that left a victim with multiple stab wounds.

On 3rd July 2021, a young man in his late teens was in Lower Stone Street at 4am when he was approached by three men he did not know. The three men were Paul Ojo, Quinton Nelson and Kenneth Roberts.

Roberts threatened him with a security stand and Ojo used a knife to stab him five times in the chest and abdomen. When the victim fell to the floor Nelson kicked his head twice.

The three men fled the scene prior to the arrival of patrols and the victim received medical attention before being flown to hospital by the air ambulance. The security stand was recovered close to the incident and, when it was examined, crime scene investigators identified Roberts’ fingerprints.

An investigation was commenced by the Kent and Essex Serious Crime Directorate and detectives traced a taxi driver who had picked up the three men after the incident.

The driver had taken them to Medway and after further enquiries, all three were arrested at an address in Gillingham on 5th July. Clothing that had been burnt was found in the rear garden of the premises that appeared identical to the clothes worn by Nelson at the time of the assault.

On Tuesday 14th June 2022, 23-year-old Ojo was sentenced to nine years in prison. He was also given an extended licence period of two years. Nelson, aged 23, was jailed for four years and Roberts, aged 23, received a sentence of two years and eight months, suspended for a year and a half.

Investigating officer, Detective Constable Chris Brett, said ‘This was a violent and cowardly attack by three men on a teenager. They then hurriedly left the victim with significant injuries and steps were taken to cover their tracks by burning clothing’.