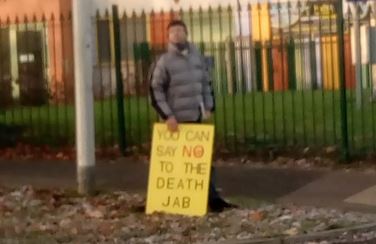 Kent Police have confirmed they will ‘look into’ the problem of anti-vaxxers demonstrating outside schools.

As children are now receiving their first doses of the COVID-19 vaccine, protesters have appeared outside of a number of Kent schools. They have various placards with messages to the children.

Parents have complained to the schools to say that it is ‘not right’ that children as young as 11 are being scared and intimidated by the protesters.

Once parent has contacted Kent police regarding these people hanging around outside of the Math school and Rochester Grammar please, saying that they are scaring the children out of life saving medication and following government COVID advice.

those involved should be ashamed of themselves

Chatham Councillor Vince Maple has added their support to the cause by saying that “Free speech is a right but with rights come responsibilities and intimidating children as young as 11 is totally irresponsible”.

Kent Police have now said that they will look into this and hopefully something will now be done to rectify the situation. Free speech is allowed in this country but not if it is intimidating and causing fear, especially to young children.