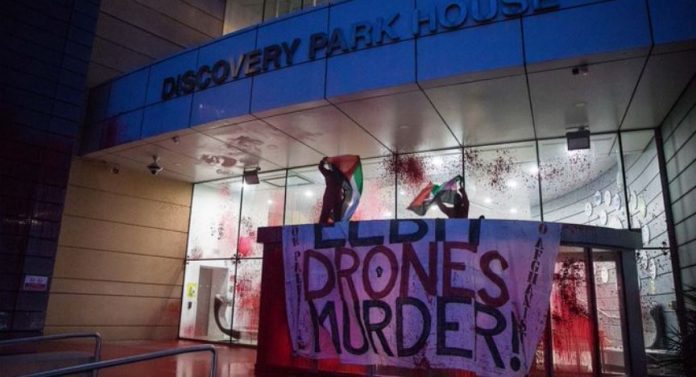 A Palestinian Activists group called “Pal Action” has blocked all the entrances to an arms company in Kent.

The 13 demonstrators blocked the landlords’ offices at Discovery Park in Sandwich, including Elbit’s factory, Instro Precision. The activists claim that the company is a weapons manufacturers for Israel, and therefore, is using these against Palestinians.

The demonstrators threw red paint over the entrance to the building to ‘signify blood’ of those that have been killed. They also chained themselves to objects and cars so that it would be difficult for police to remove them.

According to reports, 4 arrests were made at the location. The activists still claim that their blockade was successful as no-one was able to enter the premises. Perhaps they have not realised that many staff are still working from home!

There was also a demonstration in Manchester as hundreds of people demanded that landlord JLL evict Elbit from their building. Doors and windows were smashed by the demonstrators.

The same group claim that they took the same action 3 years ago, when they caused problems for the Kent company. There were no arrests last time and the group say that “Elbit are terrified of these actions ending up in court & their war crimes being exposed”.