Public Consultation Opens For A249 Junction 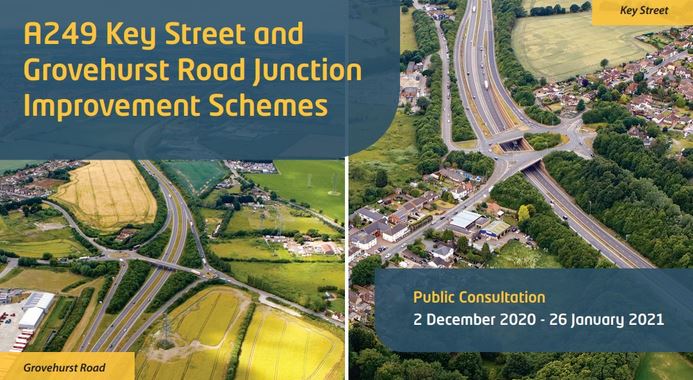 A public consultation has opened for the proposed changes to the A249 junction at Key Street and Grovehurst Road junctions in Sittingbourne.

Currently an outline design, designers are now seeking people’s feedback to help develop the detailed design before changes are made.

For Key Street, Kent County Council is currently proposing to:

The £5.8 million scheme will be fully funded through the Housing Infrastructure Fund (HIF) and contributions from developers.

For Grovehurst Road, KCC is proposing to remove the existing two roundabouts at either end of Grovehurst Road and the A249 junctions and upgrade them to a single raised gyratory using two bridges over the A249

The Grovehurst Road works will cost around £32.8 million and be fully funded through HIF.

KCC Cabinet Member for Highways and Transport Michael Payne said “We very much want to hear from people on these two schemes and for them to look at the proposals that are being put forward for changes”.

“Both the Key Street and Grovehurst Road junction improvements are needed to provide the capacity to handle future growth in and around Sittingbourne.” Is that because of the number of housing estates that keep appearing in the area thanks to the Governments rules on new builds?

Mr Payne continued “The upgrades to the junctions are needed to ensure that local communities and businesses can access the A2 and M2 without the significant congestion and queuing traffic on the A249 and surrounding local network”. So they will be able to join the existing congestion on the A2 or M2 quicker?

The consultation runs from Wednesday, 2nd December 2020 to Tuesday, 26th January 2021 and can be found here.