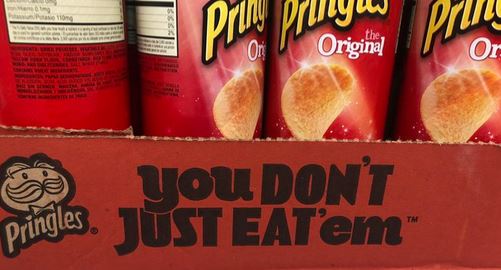 There is a huge amount of confusion in the UK today after one avid shopper took a photo of some tubes of Pringles. The slogan on the side of the box reads “you don’t just eat’em!”.

The upset shopper immediately took to social media to declare ‘What the hell are people doing with these besides eating them?!?’.

For anyone who does not enjoy snacks, Pringles are a potato based crisp that comes in many different flavours. They are sold in cardboard tubes, rather than in bags, which helps to maintain their flat appearance. Many people like to use the empty tubes as mini drums or as telescopes, although our Health and Safety advisor says not to get them too close to your eyes, especially if they are the salt and vinegar variety.

Ever since the social media post, there has been a deluge of different suggestions as people try to work out the true meaning.

One poor mother has commented that her small children don’t eat them, but prefer to drop them on the floor and then crush them into the carpet.

Someone, who was clearly worse for wear when they replied, suggested they could be fed to war horses! Isn’t that still classed as ‘eating them?’.

Another poster, happily included a photo of a Pringles tube being used as part of a car engine.

One poor person, claimed that they just stare at them in their pantry. Perhaps they are on a diet at the moment or just do not have the strength to remove the silver foil lid.

Further snack fans were happy to post pictures of them holding the potato snack in their mouths, to form a sort of duck beak.

A very clever Pringles fan claimed that they had used the tube to create a WiFi antenna.

Some Pringles fans, with literally too much spare time on their hands (sometimes known as Single Pringles), have managed to create some pretty spectacular sculptures.

So the mystery regarding the Pringes “you don’t just eat’em!” continues. There is still confusion if the slogan refers to the crisps themselves or is actually about the tube. With people struggling to sleep due to the tropical weather, this is just another mind-boggling issue that is going to keep people awake at night.

There is another final, cruel twist in the whole Pringle muddle, when we uncovered that Pringles are not even a crisp at all, but are technically classified as a ‘biscuit’. Scientists claimed that as Pringles are are made with 42% of potato – this is apparently not enough to have it classed as a “potato crisp product”. Bizarrely this is down to the fact that the crisp – sorry, biscuit tube is an “unnatural shape”.

These facts were laid out in Britain’s High Court in a case from 2008. The court ruled that Pringles are created from dough with a “mouth melt” flavour, a “uniform colour” and a “regular shape” that is not found in nature. As a result, the court ruled that they were more like a biscuit or even a CAKE than a crisp. Mind blown!

So what do you think? What are Pringles getting at or are they just trying to mess with our heads?!