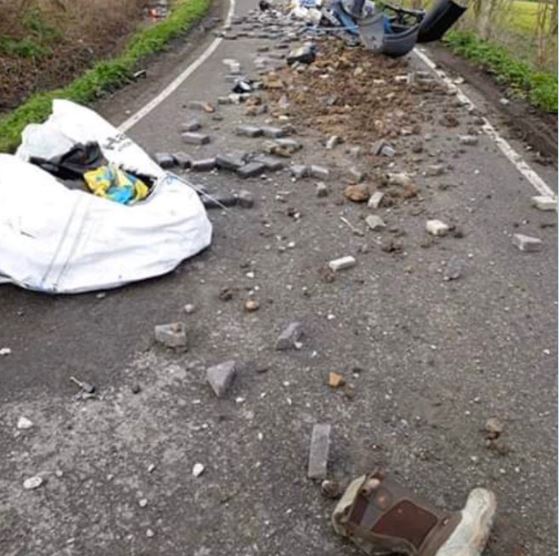 A Kent resident has reported that flytippers have dumped waste in the road again today. The rubbish has been found near Mockbeggar in Cliffe Woods.

Not only was the road impassable due to bricks and other debris covering the road, a burnt out transit van was found further down the road. It would seem likely that the van has been stolen and then dumped and set alight.

We are unsure if the police have attended the site so far, but there is hope that they may be able to use some of the dumped items to trace the criminals.

our countryside is being destroyed by these criminals

Kent has been suffernig from the growing menace of flytipping, especially as many local dumps are now charging for building waste. This changed at many dumps in July 2019. Rather than pay to despose on the waste, these people are now getting rid of these items in our countryside.

Local councils are not going to remove their waste charges, so it is about time that fines and prosecutions were increased. Although it is diffcult to catch flytippers in action, it is not impossible.

Residents and motorists can record video footage or use dashcams if they see suspicious actions. Obviously no-one should put themselves at risk, but if you drive past someone dumping rubbish and catch it on your dashcam, please send it to the police. It is only with us working together can we help the police to catch these people. Our courts need to get tougher on these people and where possible, begin using prison as the end result.