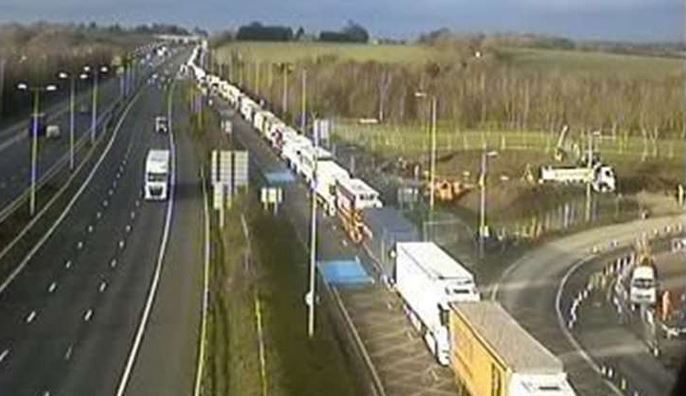 Huge queues of HGV’s built up on the M20 yesterday as the French trialled their post-Brexit procedures.

A long line of trucks formed at the access to the Eurotunnel near Folkestone, with a 5-mile traffic jam stretching back to Junction 11.

One motorist said that police barred entry to the motorway from Junction 11, and drivers were warned that anyone heading into Dover may have a delay. Operations have now ceased, and delays and tailbacks quickly eased.

Opponents to Brexit were quick to jump on the bandwagon, blaming the government for the fiasco. Many were unaware that the trial was being conducted by the French authorities rather than our own.

The delays were caused after the Police Aux Frontières, the equivalent to Border Force, rehearsed new immigration procedures from 6am until 3pm. Under the Le Touquet agreement, French authorities conduct immigration checks at the UK side of the tunnel and the port.

the government last month warned of queues of 7,000 lorries on the main motorway routes to both Eurotunnel and Dover

It was always extremely unlikely that our croissant eating friends were going to ensure the trial worked promptly and without disruption the first time. At least it isn’t a border run by the Spanish otherwise they would stop for a 2 hour siesta at 1pm, even if the sun was not out.

One source said the dry run caused delays because the French had not deployed enough staff needed for a live operation. It is very unlike the French not to have enough personnel at hand to deal with a crisis!

Last week Kent county council expressed concerns over the welfare of animals that could be stuck in lorries in the event of a standstill.

“We do have concerns over the impact the road system will have, and particularly the impact on animals in transit,” said Steve Rock, head of trading standards.

The council is looking to double the number of trading standards officers from six to 12 to cope with Brexit checks and are concerned that routine deliveries of veterinary medicine to farms and getting animals off farms to markets are not disrupted by Brexit. Obviously not concerned that much if the answer is to get a few more staff. Who thinks that 12 people is still not enough to cope with the thousands of lorries heading to the border?