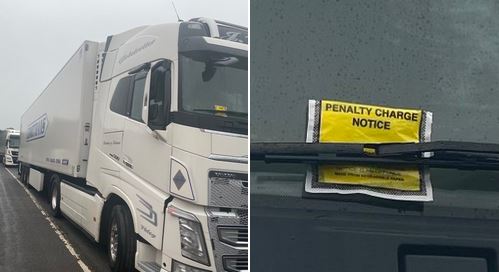 With hundreds of lorry drivers now stranded in queues close to the Port of Dover, scenes have hit farcical levels as some vehicles have been hit with parking fines.

There are hundreds of HGVs parked on the M20 motorway as part of operation Brock – with a number of diversions put in place for local motorists.

Despite the best efforts of Kent County Council and the government, there have been a number of drivers who have found themselves off the main roads.

Channel 4 News reporter Paul McNamara shared this bizarre image which he captioned ‘insult to injury’. The pictures appear to show a row of lorries parked up in a Kent layby, each of which have been given a parking fine.

During the Prime Ministers daily briefing at 5pm yesterday, Boris said there had been 500 lorries stranded but the number had been reduced to 170. Meanwhile, at 8pm Highways England declared that there are 900 lorries stuck on the M20. So is the true extent of the problem being hidden from the public?

Transport Secretary, Grant Shapps spoke yesterday regarding Kent in particular and urged that the “main message” was that people should not travel to Kent.

Mr Shapps also stated that everyone in Tier 4 must stay at home and that those in Tier 3 should remain very local avoiding travelling to other areas, particularly Kent. That is not much help to the hundreds of HGV drivers, mainly Europeans who are trying to head home for the holidays.

Kent County Council has confirmed that support for drivers stuck in the queues is under way. Food, water and toilet provision will be offered by officers going up and down the queues for as long as necessary. How an officer will provide toilet facilities to a load of truckers is a mystery to us!