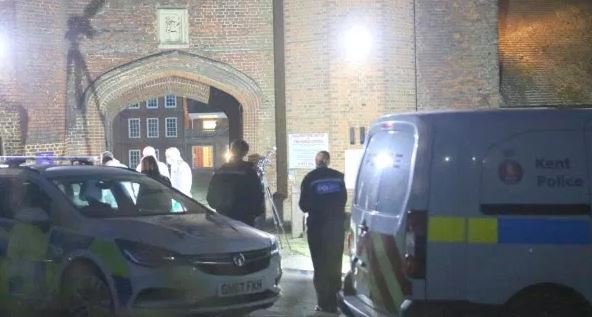 A man has died after being hit by a stone whilst at Lullingstone Castle in Kent. Police were called to the scene yesterday at around 5.20pm. Police put up a cordon around the area and were questioning motorists as well as searching fields in the area.

It is unclear if the man was walking in the Estate or angling by the lake in the grounds. There are reports that a group of youths were seen catapulting rocks and stones.

The castle, near Eynsford, has had problems with gangs previously. A witness said they saw armed police sweeping the area close to the 15th century castle and grounds. Attempts were made by officers to revive him using CPR but he was later declared dead at the scene.

It comes as locals and MPs claimed the area had been under siege from yobs in recent weeks with some threatening people and even trying to steal a woman’s dog. Residents had told of concerns the area was facing an anti-social behaviour crisis, with one telling local MP Laura Trott on Facebook: ‘Something like this was coming.’ Ms Trott, Conservative MP for Sevenoaks, said she was raising concerns over anti-social behaviour as a ‘matter of urgency’ and was ‘very concerned by the reports’.

Lullingstone Castle was built in 1497 and is a tourist attraction in the area, featuring a 15-acre lake and several gardens containing international plants. It is also home to the famous ‘World Garden’ run by celebrity Tom Hart-Dyke.

Anyone with information that may assist the investigation should call Kent Police on 01622 604100, quoting reference 28-1127.