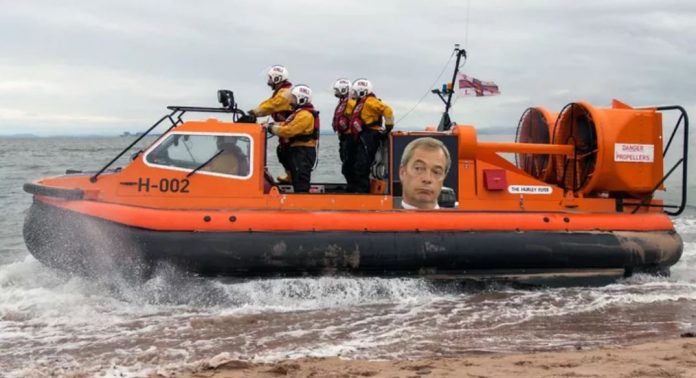 A man has managed to raise £141,000 in donations for a new RNLI hovercraft called the ‘Flying Farage’.

Simon Harris from Essex decided to create the fundraising page when he saw the RNLI losing donations after they went to the rescue of migrants in the Channel. Nigel Farage has taken many trips into the Channel to report on the number of people attempting to make the crossing. He would like the hovercraft to be based at a station in Kent.

Simon says that it would be ‘incredibly appropriate’ due to Mr Farage taking such an active interest in the RNLI’s activities. His goal is £150,000 so he only needs £9,000 more to reach the impressive target.

the RNLI is a worthwhile cause and he’s persuaded me to donate. Well done Nigel

He goes on to add that if there is any money left over, he would like to buy a pint of real English ale to smash against the front of the hovercraft in a naming ceremony. If anyone is unfamiliar with the former UKIP leader Nigel Farage, he does enjoy the odd pint or twelve!

Mr Harris does add a legal disclaimer at the bottom of his GoFundMe page adding that it is a fundraiser and that all proceeds will be donated to the RNLI – the final decision of whether they proceed with ‘The Flying Farage’ will be at their disrection.

Anyone wishing to donate to this good cause can find the fundraising page here.