HomeNewsNew Proposal For Flats At Leas Pavilion in Folkestone
News

New Proposal For Flats At Leas Pavilion in Folkestone 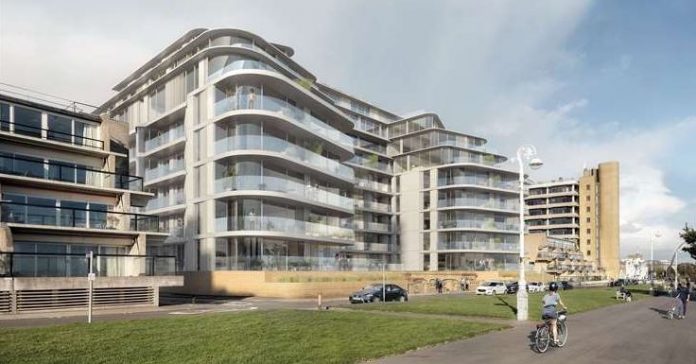 New images have been released of a luxury apartment block proposed to be built around Folkestone’s Leas Pavilion. The images have been unveiled by a team at Hollaway architects, who have worked on a rescue plan for the neglected theatre and nightclub area along The Leas.

The proposals say that £4m will be invested to preserve and restore the historic and beloved pavilion, which has fallen into disrepair over the last decade. The money will help bring the Grade II-listed building back to life and renovated to resemble its original design when it was built as an Edwardian tearoom in 1902.

there are some major concerns with such an ambitious project

Once completed, the building will be used as a residential and community space for the people of Folkestone – and will host a variety of events including musical performances, clubs, plays or stand up. This is a question for debate, as it is seen that this accommodation will be too expensive fo the majority of people in Folkestone. There is a worry that it will jsut become a glamorous place for rich people from London to use as a second home on the coast.

Surrounding the Leas Pavilion, will be a nine-storey glass-fronted apartment block including 90 flats, each with sea views over the English Channel. The development will span the two car parks in Cheriton Place and Longford Terrace, while some part of it will ‘bridge’ the sunken pavilion. There will be space for 42 cars below the flats, with points for electric car charging available and two electric vehicles available for rental by residents.

If you are unsure if you have read that correctly, it does say that there will be 90 flats and 42 parking spaces. For those who are not too hot on maths, that basically means that there is not enough parking spaces. Either the architects think that a lot of people will be walking or they do not expect all 90 flats to have permanent residents. They do not think that people living in the flats will have any visitors either.

The new plans from Hollaway were revealed to the public for the first time at a consultation held at the Leas Cliff Hall. A planning application for the scheme is expected to be submitted in the coming weeks. There are concerns from locals that this is not the right solution for Folkestone and is going to be for people from outside of the town.