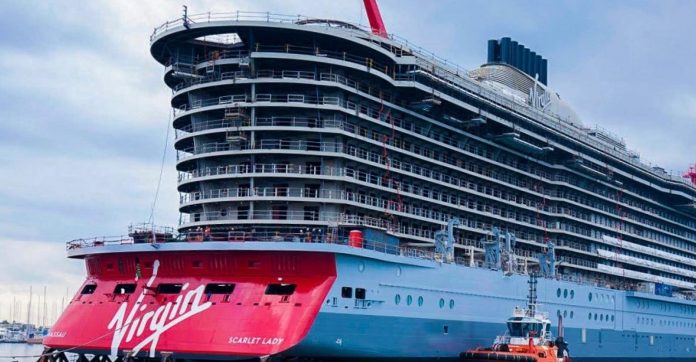 The new £550million Virgin Voyages cruise ship has visited the Port of Dover. Sir Richard Branson was onboard and gleeming like a new Dad with his new ship.

it’s the first time virgin has been seen in dover

The cruise line hopes to attract a younger generation to holidays on the seas, replacing on-board formal dinners with gigs, tattoo parlours and vinyl stores. There could be plenty of wonky tattoos if the seas are a little rough. The adult only ship will replace large dining halls with up to 20 smaller brunch bars and restaurants. Plenty of opportunities for piling on the calories then.

They will also replace traditional excursions, with trips to a private beach club in the Bahamas, where celebrity DJ’s will attempt to entertain the over-fed, drunken mob.

Tweeting about his experience sleeping on the ship, Mr Branson said “I’ve wanted to launch a cruise line since I was in my 20s and I’m so excited that it’s finally happening with @VirginVoyages. When I woke up in one of the Rockstar Suites this morning, I really had to pinch myself.” Let’s hope this wasn’t due to him taking the rock’n’ roll life too literally!

The car-park looking vessel will travel to Liverpool for two days before heading across the Atlantic for a star-studded reception in New York. It will then travel to Miami, where she will based before making her inaugural passenger voyage around the Caribbean in April. Whether a younger crowd and cruising will work, only time will tell – let’s hope they have plenty of sick bags!