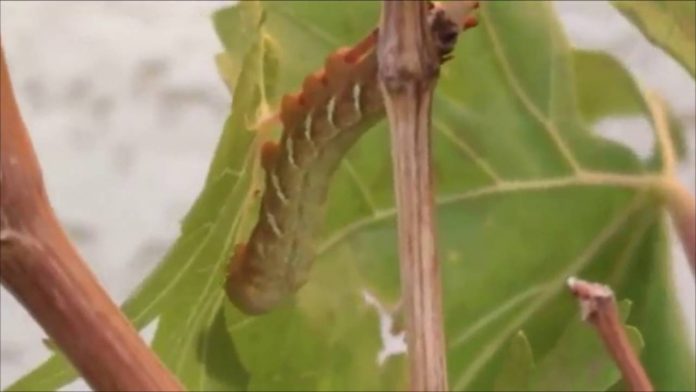 An important news story for Kent today is that a caterpillar has been found in a packet of grapes that were purchased in an Aldi store in Ashford.

The story leads the way over at KentOnline with the most comments so far on this gripping topic. The 70 year old was apparantely alarmed at the shock discovery. What was more interesting is that they chose black grapes over green ones.

The article continues that the grapes were taken back into the shop where a prompt complaint was made. The pensioner stated ” I was shocked. I took it to my son’s house and he looked it up and said it could be poisonous. I usually shop at Aldi once a week but I won’t buy any fruit from Aldi again”.

At least they found a whole caterpillar and not half

According to nature experts, the caterpillar is a Lobesia Botrana, which is not poisonous.

The customer was given a full refund for the grapes plus a £5 voucher, which is ironic given the fact they they said they will not be shopping at Aldi again. Will the temtation of a free £5 voucher change their mind?

Meanwhile, the management at Aldi’s are said to be devastated at the loss of another customer and are demanding to know who hid the small creature in the grapes.

One customer who eavesdropped on the whole drama was heard to say “Who would have thought you would find a caterpillar in some fresh fruit? We will need all our fruit and veg to be sterilized from now on”.

For anyone who has not been traumatised by the shocking events of this story, we have found some grape inspired caterpillars you can make for your children – or yourself!