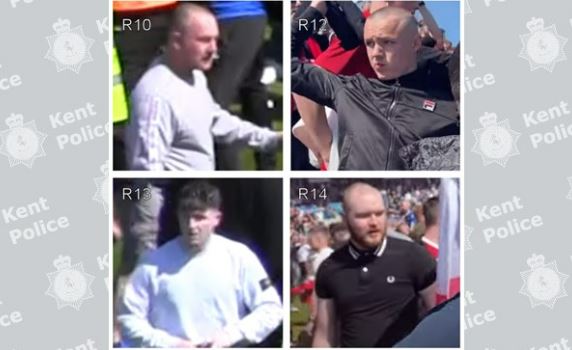 Police Officers investigating a pitch invasion following a Rotherham United match last season, have released images of people they believe can assist them.

A large number of supporters ran onto the field of play immediately following the away fixture with Gillingham FC at Priestfield Stadium on Saturday 30th April 2022, with fights breaking out and objects thrown.

The disturbance is being investigated by Kent Police officers who have been reviewing footage from multiple sources and have so far arrested and bailed eight men from Kent on suspicion of public order offences including violent disorder.

Enquiries have also been carried out with assistance from South Yorkshire Police into alleged offences committed by supporters who entered the field of play from within the Rotherham section of the ground.

If you recognise yourself or someone else in the images then please call Kent Police on 01634 792209 quoting reference 46/108028/22 and the ‘R’ number on the image you are calling about. You can also call the independent charity Crimestoppers anonymously on 0800 555111.