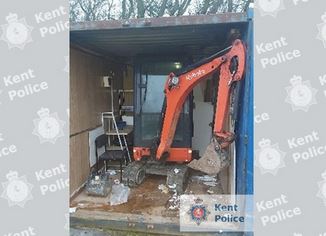 A search by officers from Kent Police’s Rural Task Force led to a stolen digger being recovered.

The digger was reported stolen from East Sussex and enquiries led the Rural Task Force officers to search for it at a rural property in Sandwich on Saturday 18th December 2021. With the assistance of Kent Fire and Rescue Service the digger, which is valued at £20,000, was seized from a locked container.

It had been fitted with a tracker device which allowed officers to narrow down their search significantly when attempting to locate it. The use of tracker devices on valuable machinery is highly recommended.

The digger will be returned to the rightful owner once police enquiries have concluded. It is currently unknown if anyone has been arrested for the theft of the digger.