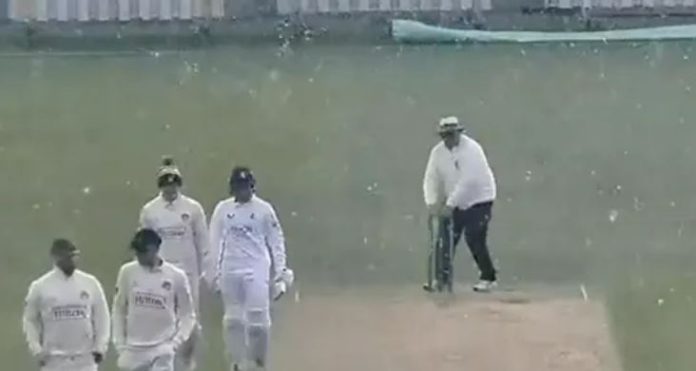 A snow flurry has caused a warm-up cricket match between Kent and Lancashire in Canterbury to be called off.

The teams were playing a friendly before the start of the county cricket season yesterday, but the wintery weather put an end to the two-day game, which ended in a draw.

is sledging allowed in cricket when it snows?

The players were asked to leave the field of play after the blizzard made conditions too difficult. Many players wanted to continue and asked if ‘sledging’ was allowed.

Kent and Lancashire were not the only county teams to be affected by the unseasonal weather, as players from Nottingham CCC had to run for cover after snow interrupted their team photoshoot.

N.B. For those who do not follow cricket, ‘sledging’ is a term used in cricket to describe a devious practice whereby some players seek to gain an advantage by deliberately insulting or verbally intimidating the opposing player. The purpose is to try to weaken the opponent’s concentration, thereby causing them to underperform or be more prone to error.