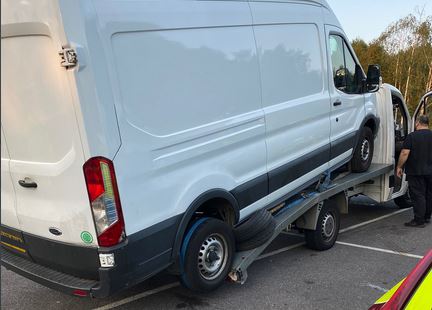 A stupid man has failed dismally in is attempt to recover a broken down white van.

Mr Stupid was spotted by a marked police motorcycle on the M20 near Maidstone yesterday. He had attempted to put the van onto the back of his recovery vehicle, which was woefully inadequate for the job.

Our stupid driver was asked to pull over in a safe place so that the police could take a closer look at his handy work.

Not only was the recovery vehicle completely unsuitable, the police also discovered a number of other issues with the vehicle. He had also used some old tyres to help balance the van on his trailer, although no-one is sure how he actually managed to achieve this.

Mr Stupid’s vehicle was prohibited from moving any further and he will soon be the proud owner of a summons to court.

Everyone is hoping that Mr Stupid does not continue his acts of stupidity by using an electric scooter to get him to court!