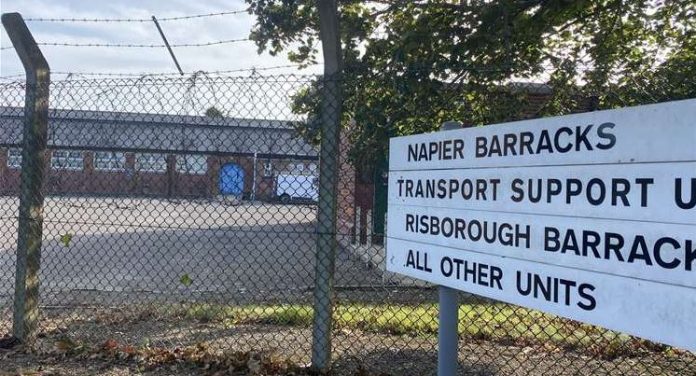 A welcome event has been organised to show support to the people now living at Napier Barracks in Folkestone. The Kent Refugee Action Network (KRAN) has organised the event along with charity Samphire and Churches Together Folkestone to show the support for the people staying at the barracks – who are all single, adult men. It’s planned to be a jolly nice day out for all the whole family, with a passing carnival parade of police riot vans and NF protesters.

Bridget Chapman, from KRAN, said “It came about because we felt that there was a lot of local support for the new residents at Napier Barracks and we thought that people needed a way to actively display that support. We were getting messages all the time from people asking what they could do and we thought that this would be a really nice way to demonstrate all that goodwill.” Residents, they are not supposed to be there long-term? It’s not an old people’s home – perhaps you should be visiting the countries old war heroes who also need support.

The welcome event will take place on Saturday, 17th October outside Napier Barracks, and will follow Covid-19 guidelines. Attendees will arrive in groups of six maximum and are invited to bring home-made signs with messages of support. Cards will also be available for people wanting to write a message on the day. There has been no information so far if the people inside the barracks will they be allowed out or if the welcome event attendees will have to push small cakes through the chainlink fence? If they do let them out, let’s hope they have plenty of security planned and some fast runners.

The Ministry of Defence has made Napier Barracks available for 12 months. But the decision has not met with support from everyone, including MP Damian Collins who wrote two letters to the Home Office voicing his objections. There has also been protests outside the barrack gates, where the guests were confronted and police called. Many people think the asylum process is taking too long and the people should be returned to Europe much faster than is currently happening.

There has been some negative comments online, but most peope are frustrated with the Government’s handling of the situation, rather than against the refugees themselves. Bridget Chapman said “This hasn’t been helped by the lack of communication from the Home Office which has added to people’s sense of alarm.”