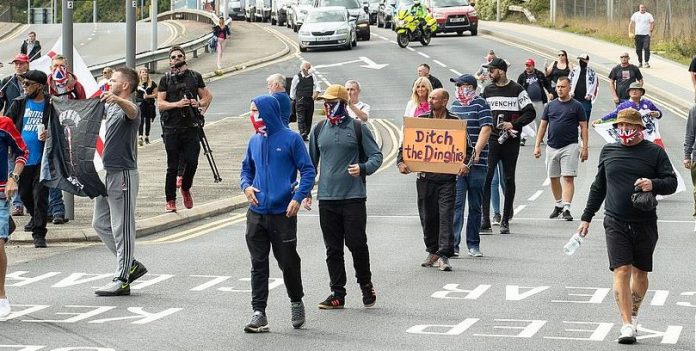 Hundreds of anti-illegal immigration protesters have clashed with police in Dover as their protest became violent. The protesters blocked blocked the A20 dual carriageway, the main route in and out of the port, as they chanted shouted ‘England ’till I die’.

The protests occurred after a record 409 desperate asylum seekers crossed the Channel in one day this week. The protesters are angry that thousands of illegal immigrants have made it to the UK and that the UK Border Force and RNLI are potentially assisting people traffickers. Hundreds of campaigners were confronted by groups of pro-migrant protesters in a counter-demonstration following the arrival of 5,600 refugees in small boats this year.

There were fears of violence ahead of today’s demonstrations as many announced their intention to assemble in the Kent town.

Ironic that so many police present, yet none to be seen when migrants arrive on kent’s beaches

By 2pm, the group of around 100 pro-migrant protesters that had gathered in the town centre had dispersed, while the anti-migrant activists were being walked off by officers.

Officers made ten arrests during today’s protests, with offences including racially aggravated public order, violent disorder and assaulting an emergency worker. Enquiries are ongoing to identify any other offences.

A group of around 60 people shouting ‘freedom’ and ‘get these scum off our streets’ were seen moving along Dover seafront. The remaining anti-migrant protesters were ushered towards the railway station, with police on horseback among the large numbers of officers moving the line along.

Peter Keenan from Kent Refugee Help spoken to the group of pro-migrant supporters and said ‘when society sees people who are fleeing war and turns them away ‘that says something about the state of your society. We are not those people. We are standing up and welcoming people who are in desperate circumstances fleeing from awful situations.’

It is a sad day when protesters have to take to British streets demanding action from the Government. If MP’s had taken swift and prompt action, situations like today need not have happened. No matter what your feelings on the migrant issue, it is clear that councils are unable to cope with the current numbers arriving from France.