HomeNewsArchbishop Of Canterbury Gets Caught Up In Meghan Row
News

Archbishop Of Canterbury Gets Caught Up In Meghan Row 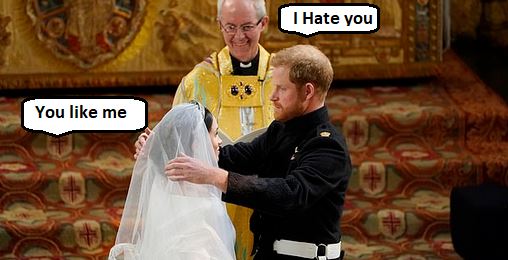 A spokesperson for Harry and Megham said ‘The couple exchanged personal vows a few days before their official/legal wedding on 19th May.’ A backyard exchange of vows is not a marriage. Despite this, Harry chipped in during the Oprah interview, adding it was ‘just the three of us’.

The Queen was quick to correct the spokesperson with ‘one does not have a backyard in England, it is a called garden, dear!’

The Archbishop does not normally comment on personal matters, but has felt the need to defend his legal position in the matter. He added ‘I had a number of private and pastoral meetings with the duke and duchess before the wedding. The legal wedding was on the Saturday. I signed the wedding certificate, which is a legal document, and I would have committed a serious criminal offence if I signed it knowing it was false.So you can make what you like about it. But the legal wedding was on the Saturday’.

So is it just a case of the ‘wise couple’ not understanding what a rehearsal is or is there more to this story?

Reverend Canon Giles Fraser, the rector of St. Mary Newington church in London, said that ‘it was probably a blessing. But they got married legally at Windsor.’

Mr Edwards, vicar at St Matthew’s Church in Dinnington and St Cuthbert’s Church in Brunswick, Tyne and Wear, said he was told by a Lambeth Palace staff member ‘Meghan is an American, she does not understand’. Perfect!

It would seem that there is a lot that dear Meghan has not understood since getting shacked up with the Prince.

This is the latest in a line of disasters since the couples post-apocalyptic departure from Royal life. There have been issues since the Harry and Meghan departed for a quieter life in America to avoid the paparazzi and get out of the media. They started this new quiet adventure by lining up an interview with Oprah Winfrey which attracted a global audience.

Not content with upsetting Harry’s family enough by taking the Prince out of the country, the interview covered all sorts of unhappiness including accusations of racism and other issues.

Following the interview, Buckingham Palace issued a statement on behalf of the Queen saying: ‘Recollections may vary.’ Well, that was the response that the public got to see!