Boat Damaged By Fire In Queenborough 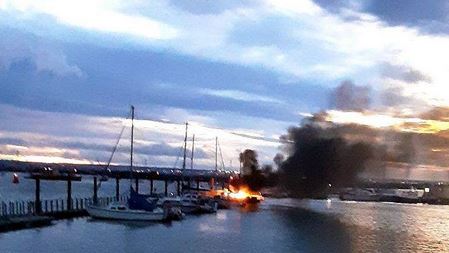 A 22-foot pleasure fishing boat has been badly damaged by a fire at Queenborough Wharf after a fire broke out just after 6pm last night.

Firefighters and paramedics were called to the quayside in Queenborough on the Isle of Sheppey after a loud explosion was heard.

The 6.7 metre boat, which is owned by someone from Dartford, was fully alight when firefighters arrived and they used a main jet hose and light portable pump to extinguish the flames.

Harbour director Geoff Reed said “We heard a boat exploded and called the emergency services. There was a column of smoke coming off it”. That was probably caused by the huge fire engulfing the boat, Geoff!

One man was treated by paramedics for the effects of breathing in smoke. The cause of the fire is currently unknown, although it is thought that the boat’s owner had been working on the engine earlier that day. Seems like he stuck his tool in the wrong place!