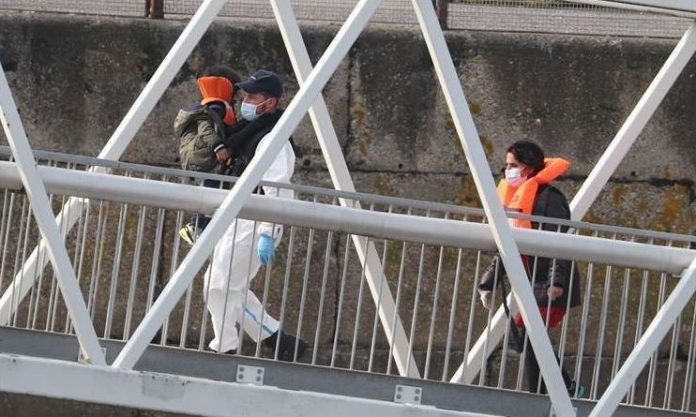 Calm sea conditions in The Channel has allowed dozens more migrants to make the journey to the UK. A group of up to 40 people, including children, wrapped in blankets and wearing lifejackets have been seen arriving at into the Port of Dover this morning.

The migrants were spotted being escorted up the gangway to the harbourside, where they will be processed by immigration officials.

Elsewhere, there are reports of up to 30 arriving in one boat at St Margaret’s Bay. At least they arrived before the COVID 6 people rule comes into force, or they would have all been fined!

Meanwhile, a Border Force rib was seen towing a further four dinghies into the harbour. The number of people that have made the journey in those dinghies is unknown. There are further vessels carrying migrants in the Channel and are being ‘monitored’ by the Coastguard. By monitored, we mean watched until they get past half way when the UK Border Force will have to go and get them.

Clandestine Channel threat commander, Dan O’Mahoney, said: “These crossings are facilitated by criminals who risk people’s lives for money. These migrants are leaving France which is a safe country, where those seeking refuge can and should claim asylum, rather than attempting these perilous crossings to the UK.

“We are working with our French counterparts to pursue these heartless criminals and make this route completely unviable, and continue to return those who do not have a legitimate asylum claim in the UK.”

Sadly, the work the UK are doing with our French counterparts seem to be coming to nothing as the crossings continue unabated. Meanwhile, cheers could be heard coming from the French Border Force offices as another dinghy leaves French shores on its way to the UK.