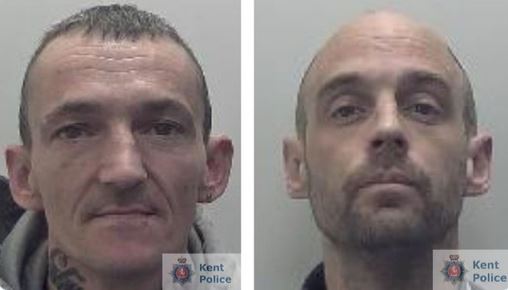 Two robbers who broke into an elderly couple’s home and threatened them with a knife before the man was forced to withdraw money have been jailed for a total of 22 years.

Peter Savage and Daniel Hake entered the home of the couple in the Sturry Road area of Canterbury in the early hours of 26th February 2020 before dragging a man in his eighties, out of bed.

The man’s wife, who is in her nineties, was threatened with a knife as she lay in bed and the man was cut behind the ear and punched as he tried to protect her.

The intruders then stole the victim’s bank card and demanded his pin before leaving in his vehicle. They later returned and the elderly man was taken to a local Post Office.

Daniel Hake, who had acted as a lookout during the robbery, stayed at the elderly couple’s home and the male victim was told that if he didn’t comply with their demands, his wife would be killed. £500 was then withdrawn from his account.

The victim was then taken home and the robbers left with the money, as well as jewellery, watches, mobile phones and perfumes.
DNA

The victim contacted Kent Police and officers from the Chief Constable’s Crime Squad identified Savage from local CCTV. Hake’s DNA was meanwhile found on a bottle he had drunk from and the two men were arrested on 10th March 2020.

the court has recognised the seriousness of the offences and imposed substantial prison terms, which will protect the public from these criminals

Savage admitted robbery and Hake was found guilty of the same charge on 22nd October 2020 following a trial at Canterbury Crown Court.

On 12th February 2021, Savage, 41, formerly of New Town Street, Canterbury, was jailed for 12 years and Hake, 38, of no fixed address, was given a 10-year sentence. Thankfully these handsome looking thugs will be at her majesty’s pleasure for a long time, although its a shame they may have a chance of parole after serving only half of that time.

Savage’s sentence included terms for being concerned in the supply of heroin and cocaine, after the drugs were found at his former home in Craddock Road, Canterbury in 2019.