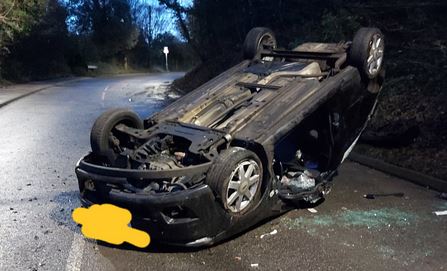 Kent fire, ambulance and police were in attendance to a vehicle collision in Hartley last night.

One car was found on its roof on Ash Road in Hartley. The male driver was wearing his seat belt which saved him for further injury.

It is unclear how the incident occurred, but it is obvious the driver waited for the snow and ice on the roads to clear so that there were safer road conditions, before venturing out to have their ‘monster’ accident. Perhaps their wet foot slipped on the throttle!

The condition of the driver is unknown but their car is going to require a bit more than a polish to make it roadworthy again.

Kent Police advise all drivers to take care on wet roads – something this person failed to do!