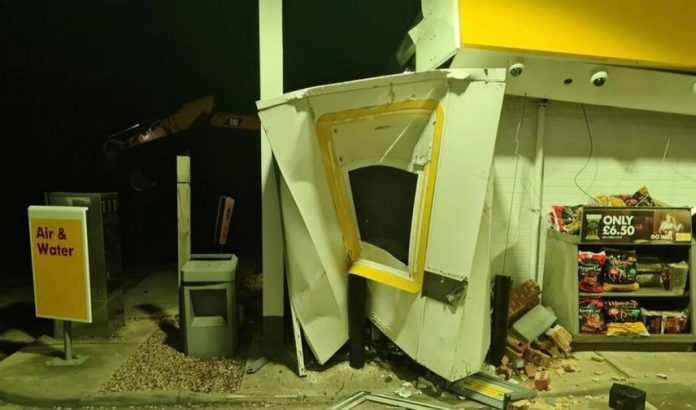 Thieves have used a mini digger to steal a cash machine from a Shell service station in the second such raid in 24 hours.

The incident happened in the early hours at the Shell Lychgate garage near Dargate, on the A299 Thanet Way between Faversham and Whitstable. It is being treated as linked to another attempted theft on Sunday.

The thieves used the digger to remove the cash machine, causing a considerable amount of damage in the process. It is incredible that this happened under the watch of so many security cameras. The cash machine was then loaded onto the back of a grey flatbed Ford Transit, which is reported to have left the scene in convoy with a dark-coloured Mitsubishi Shogun. It is even more unbelievable that a convoy of vehicles were able to leave the scene undetected.

The incident is being linked with an unsuccessful attempt to steal a cash machine from the wall of a Tesco Express store in High Street, Dymchurch, at around 2.15am on Sunday 28th February 2021.

Both offences are being investigated by detectives from the Kent and Essex Serious Crime Directorate. Witnesses or anyone with information is urged to call the appeal line on 01843 222289 quoting reference 01-0066. You can also call the independent charity Crimestoppers on 0800 555111 or complete the online form at www.crimestoppers-uk.org