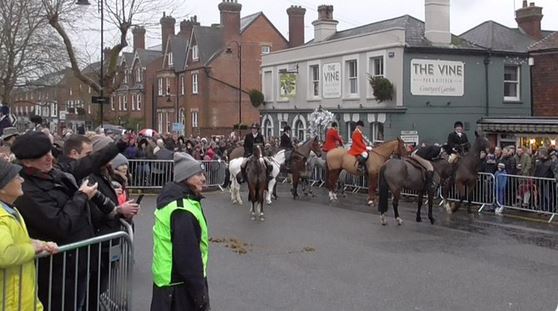 A group called the ‘Kent Hunt Saboteurs’ is planning a demonstration against the Ashford Valley Hunt over Christmas.

The Ashford Valley Hunt are planning their illegal annual fox hunt on 27th December, starting in Tenterden High Street at 10.30 am.

The group are hoping that Kent County Council will not want to be associated with any sort of hunt in the county and will ban any hunt event.

Fox hunting is illegal in England, Scotland and Wales after it was banned by the Hunting Act 2004 in England and Wales, and the Protection of Wild Mammals (Scotland) Act 2002 in Scotland.

Although the act of hunting is illegal, the Hunting Act it lists a total of nine reasons why a hunt group may flout the ban. One of the more commonly invoked exemptions maintains that it is legal to hunt foxes if they pose a danger to livestock, game, crops or fisheries.

There is also the dubious practise of “manufactured” trail hunting in which hounds are supposed to follow an artificial scent trail with no animal chased or killed. In reality, hunt organisers use actual fox scent and lay routes deliberately close to where foxes are known to live, meaning they quickly become the subject of a hunt.

The hunt was formed in 1873 from the combination of four private harrier packs, which amalgamated under a single master as the Ashford Valley Harriers, hunting predominantly hares but also occasional foxes.

The hunt country lies in the West of Kent, adjacent to other packs such as the Southdown and Eridge Hunt, East Sussex and Romney Marsh Hunt and the West Street Tickham Hunt. Major meeting points include the Boxing Day meet in Tenterden, and Tunbridge Wells.