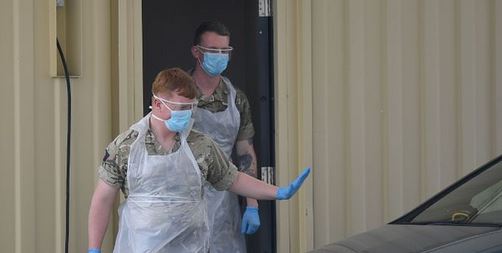 The COVID testing centre at Ebbsfleet International station has been closed down so that the site can for Brexit, it has emerged. The site, whic hhad been doing up to 2,000 COVID tests a day will be used into a lorry park.

HMRC has been seeking to use the railway land, which is located between Dartford and Gravesend.

A Kent County Council (KCC) letter has been leaked to the Local Democracy Reporting Service which shows that the Ebbsfleet Covid testing centre closed two weeks ago because it would be needed for Brexit purposes. That’s not wan you want to hear during the start of the second wave of COVID!

The document reads: “We have also been notified that the Ebbsfleet testing centre has closed, as the site is required by HMRC for EU Exit.”

The precise use has not been confirmed but it is rumoured that one of Ebbsfleet station’s car parks would hold up to 80 lorries at a time and a booking system implemented for slots.

What are we doing Brexit for if everyone is dead?

The news has immediatley whipped up anger amonst local officials. Dartford councillor Sacha Gosine (Lab), has written to local MP Gareth Johnson (Con) raising concerns. He said: “The infrastructure at Ebbsfleet cannot cope with lorries.” Ermm, what about your local residents and COVID??

Dartford council’s main opposition leader added: “We are talking about pandemonium for the rest of Dartford and its residents.” So no mention of COVID there either, does our health not count for anything?!!

A new coronavirus test centre has opened in Medway – off Curtis Way Coach Park in Rochester, which is over 10 miles from Ebbsfleet. Not so handy if you think you have COVID symptoms and do not have a car. Public transport anyone?

Cllr Gosine says the pandemic should dominate the focus of the Government rather than removing an existing Covid site. He said: “What are we doing Brexit for if everyone is dead?”. Ummmm, that doesn’t sound too positive?