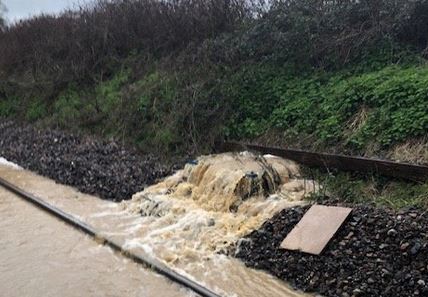 Heavy rain is affecting areas of Kent today as the wet start to the year continues. Rain has been falling all day, especially in the South and is expected to go on until at least 6pm.

Network Rail have reported that the freight-only branch at Grain, Kent, is underwater as water is overflowing out of a drain. They say there are reports of flooding across the South East today, but this remains the only line blocked.

The Environment Agency are also issuing flood alerts on most Kent river catchments. In addition a number of roads are partially flooded due to the heavy rain, especially A249 & A26 and most rural roads.

KCC has also announced that they are expecting flooding to happen in the town of Buxted.

Highways England are also warning of dangerous driving conditions on the comute home this evening. Please drive sensibly and in accordance with the current road conditions. Cars can aquaplane easily when there is a large amount of surface water. Reduce your speed a little and get home in one piece rather than spending the evening retrieving bits of your car from the side of the road.