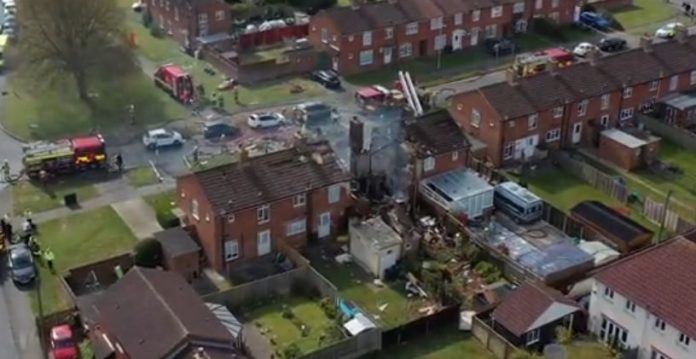 Seven people have been injured, two seriously after a gas explosion destroyed a house in Ashford.

The blast happened around 8am in Mill View in Willesborough, Ashford and neighbours reported the ground shaking due to the force. Several people were trapped inside the remains of the house until some brave people rushed in to get them. The fire brigade arrived soon after to check if there were any other people trapped but all have been accounted for.

An elderly couple were said to be living in the £350,000 house, although its value has now has been reduced somewhat!

Pictures reveal a smoking ruin with a single chimney stack standing among wreckage and rubble strewn across the street and the gardens of surrounding houses.

A Kent Fire and Rescue Service spokesman said ‘Crews are working to extinguish any remaining signs of fire following an explosion at a house in Mill View, in Willesborough, Ashford’. We are well aware of the explosion but thanks for confirming!

The London Air Ambulance was also sent and landed in Hythe Road recreation ground behind the homes in Osborne Road. It took off at about 10am with a single casualty on board.

The cause is yet to be established but at this stage the incident is not being treated as suspicious.