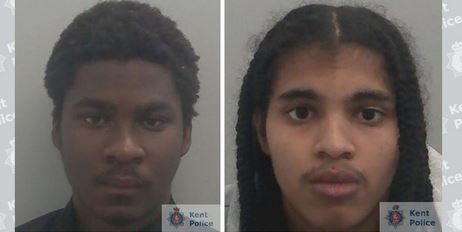 Two Heroin and crack cocaine dealers who exploited a 14-year-old boy in Gillingham have been jailed.

Kieran Appiah and Muhammed Khan-Brown’s offending came to light after Kent Police officers seized class A drugs and a phone from the boy in May 2020.

A careful review of data on the seized handset showed both men were using him to act as a runner on their behalf. This evidence led to officers visiting addresses where the offenders were staying and detaining them.

Both men were sentenced at Maidstone Crown Court on Tuesday 30th November 2021 and will serve more than five years between them.

Kent Police’s investigation into the offending began on 26th May, when a proactive patrol noticed a teenage boy was supplying drugs in the Livingstone Road area.

The boy was stopped and found to be in possession of 38 wraps of crack cocaine and heroin, which were ready for sale on the streets.

A mobile phone was also seized and data from the device showed he had received 142 calls which were directing him to supply drugs.

Enforcement action was not taken against the boy, as it was clear that he was being exploited by organised criminals. Instead, officers worked with partner agencies to ensure he was supported and safeguarded from further harm.

With the boy safe, the County Lines and Gangs Team continued to scrutinise the call data which led to officers gaining an understanding of Appiah and Khan-Brown’s movements.

Appiah was arrested after officers visited a Gillingham home on Thursday 28th July 2020. The address belonged to a vulnerable adult but was being used by the offenders as a base to supply heroin and crack cocaine.

Appiah attempted to run from the scene but was detained and taken into custody. His personal phone number was also found to have sent several communications to the teenager.

Khan-Brown was arrested at his home address the following morning by the Metropolitan Police. Upon noticing the officers, he jumped out of a window and attempted to climb over the fence but was stopped from doing so by a constable.

A search of his address led to quantities of heroin and crack cocaine being located, alongside paraphernalia used to supply drugs.

While in custody, both men were charged for their roles in offending and remanded in custody by Kent Police ahead of a court hearing.

Appiah, 21, of Mount Nod Road, Streatham, admitted conspiring to supply heroin and crack cocaine and two counts of robbery. He was sentenced to two-and-a-half years’ imprisonment. The robbery took place in Hillyfields Park, Gillingham, on 5 October 2019 and led to a bike and a coat being stolen from different teenage boys.