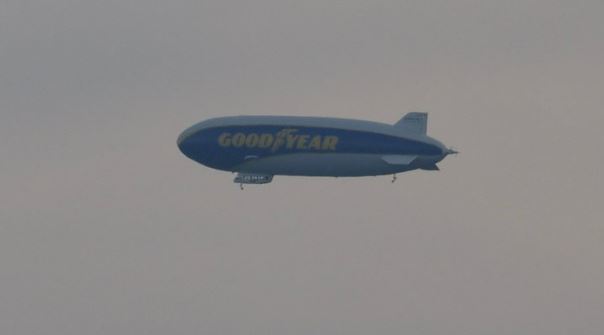 The famous Goodyear blimp has been seen in Kent skies ahead of its weekend appearance at Brands Hatch.

The blimp was spotted yesterday as it ‘whirred’ its way along the coast past Faversham and Gravesend.

The impressive blimp can be seen over the London skyline later this week before heading to Brands Hatch to help with aerial footage at the British Touring Car Championships (BTCC) over the weekend.

It is based at Damyns Hall Aerodrome, near Aveley, Essex for this week’s flight programme.

It was intended to fly out for its first flight today but it had to be brought forward by a day due to the cold and wet weather predicted over the Channel. No chance of spotting any asylum seekers in the Channel today then!

Although we prefer the term ‘airship’, it is actually a ‘blimp’. A blimp, or non-rigid airship, is an airship without an internal structural framework or a keel. Unlike semi-rigid and rigid airships (e.g. Zeppelins), blimps rely on the pressure of the lifting gas (usually helium, rather than hydrogen) inside the envelope and the strength of the envelope itself to maintain their shape. So there you go!