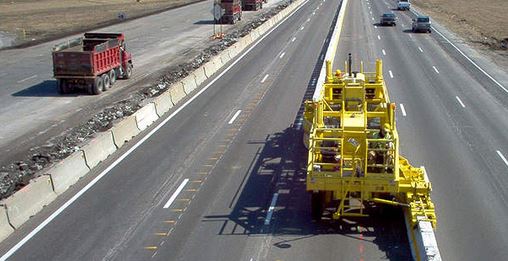 A concrete barrier that can be set up within hours to keep Kent’s roads moving at times of cross-channel disruption will be available and on standby from later this year, Transport Secretary Grant Shapps announced.

The government Transport Secretary said that the state-of-the-art technology will be able to be deployed quickly, simply and safely – andf probably slowly. A specialist vehicle has been purchased which will be able to deploy the moveable barrier on the M20 swiftly and safely to ensure minimal disruption to motorists. The governement statement seems to indicate that they have only purchased one vehicle, so all kinds of problems could following once we get the wrong kind of rain or snow.

why has it taken so long for the government to invest in this solution?

Moveable barriers are already used in cities around the world, including Auckland, Sydney, San Francisco and Vancouver, so it is a mystery why it has taken so long to arrive in the UK. Kent residents have had to put up with months of disruption, thanks to Operation Brock. Now Brexit is nearly over they suddenly find a new special vehicle.

The technology has been chosen by the Department for Transport and Highways England as a long-term solution to Operation Brock and Stack and “will ensure Kent is prepared for any disruption on the short strait, such as from industrial action or bad weather”. Let us hope that this new vehicle is reliable then.

The new solution also means that Highways England’s work on an ‘off road’ replacement for Operation Stack has been stopped. As part of this, previous Highways England plans for a new large lorry holding area in Kent, such as at Manston, are no longer being pursued.

This will be a relief for some Kent residents who were being faced with either a large number of lorries passing through Kents roads to get to any such lorry holding area or having the holding area on their doorstep. But it does leave Kents motorists with the issue that the M20 could be turned into a lorry park at short notice at any time in the future – plus all the anti-social behaviour that comes with it.