HomeNewsCurrys in Orpington Robbed By Gang Of Youths
News

Currys in Orpington Robbed By Gang Of Youths 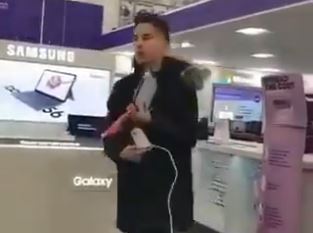 Footage has emerged online of a robbery taking place at Currys / PC World In Orpington. The crime occured during late afternoon in broad daylight. We have no date but it seems to be recent footage.

The gang of around 4-5 male youths entered the technology shop and began ripping iPads and laptops away from their mountings. The video shows the gang removing the devices without wearing any masks.

Eye witness reports state that at least one of the gang was holding a knife. The gang left the building with their sizeable haul and disappeared.

So far, there has been no comment from Orpington police. People who have viewed the footage are in shock at the brazen robbery. One states that the criminals “have to fear of being identified at all”.