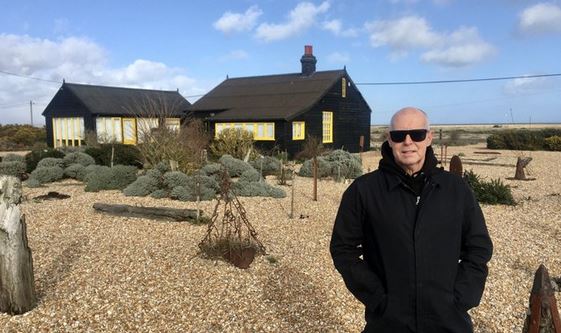 The Pet Shop Boys visted Prospect Cottage in Dungeness yesterday and lead singer, Neil Tennant was happ to have his photo taken outside. Prospect Cottage is the former home of Derek Jarman, an English film director,stage designer diarist, artist, gardener and author who died in 1994.

The Pet Shop Boys were on a memoery visit as they say they have fond memories of their vistis to Prospect Cottage in the late 80s and early 90s. Derek Jarman directed the 1989 tour by the UK duo. By pop concert standards at the time, this was a highly theatrical event with costume and specially shot films accompanying individual songs

the cottage sits in the shadows of dungeness nuclear power station – does it glow in the dark?

The Pet Shop Boys added “One sunny afternoon in 1988 we sat outside drinking tea and discussing ideas for our first tour production which Derek directed”.

There is now fundraising in place to try and protect and secure the future of Prospect Cottage. The fundraising page says “On the windswept shore of Dungeness, visionary British filmmaker, artist and activist Derek Jarman transformed a Victorian fisherman’s hut into a sanctuary of art and imagination. Prospect Cottage and its iconic garden stand testament to his defiant spirit, and have the potential to inspire artists and visitors long into the future”.

“More than 25 years after his death, Prospect Cottage, his former home and garden, continues to be a site of pilgrimage for people from all over the world, who come to be inspired by its stark beauty and by Jarman’s legacy. From poetry etched into panes of glass, to Jarman’s driftwood sculptures and the remarkable garden he coaxed from the shingle, it represents the most complete distillation of his creativity and determination.”.