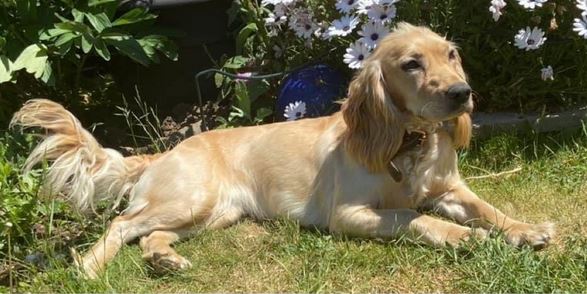 A distraught dog owner is asking for asssitance to find their dog ‘Honey’, which was stolen in Meopham on 17th June. Owner Cintia Gardner had her spaniel taken during the summer has has been frantically looking for her ever since.

We understand Honey was microchipped but so far the search has not been successful.

In light of the discovery of so many stolen dogs, police have urged dog owners to ensure pets are microchipped.

In the early hours of Wednesday, 9th September, officers from the Met’s South Area BCU recovered 24 dogs from Star Lane following an early morning warrant. An additional 25 dogs have since been seized from the site during ongoing searches.

Officers now believe that some of these dogs have been stolen and are looking to reunite them with their rightful owners, however this is proving difficult as most of the dogs have not been microchipped, meaning officers are not able to contact the owners.

Officers also suspect they have uncovered unlicensed puppy breeding operating at the site. Police are working closely with Bromley Council who have started an investigation into offences under breeding regulations.

Inspector Paddy O’Hara, from the Met’s Dog Unit, said: “It’s really important for dog owners to microchip their dogs, so that if, in the unfortunate circumstance, they are stolen, we can return them to you as quickly as possible if they are recovered.”

On Thursday, 10 September, an appeal issued across Bromley MPS social media accounts to reunite these dogs with owners reached almost one million people – the post also highlighted the importance of ensuring dogs are microchipped.

One of the dogs has since been reunited with its owner after being missing for six months.