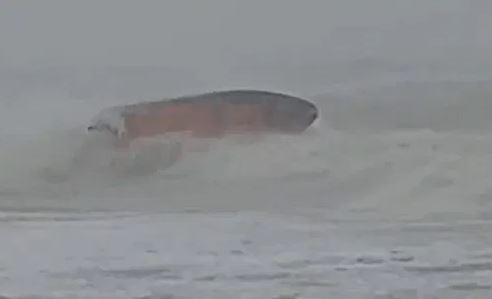 A foolish surfer who got in to trouble off the Hastings coast during Storm Ciara prompted a resuce attempt from the RNLI. But when the lifeboat from Hastings came to save him in the stormy seas, it nearly capsized in the choppy water.

As well as the lifeboat, a helicopter was seen hovering overhead as it search the seas for the person. The RNLI later confirmed that the person was safe and well, even though they had been washed a considerable distance along the coastline.

The RNLI also reported that all its crew were safe and well and that the lifeboat had survived its near capsize. Lifeboats are designed to cope with these kind of conditions but it must have been a scary experience for the crew.

will this surfer be fined?

Although surfers want to make use of the rough conditions, yesterday was too extreme for anyone to be in the sea off the Kent coast. The weather was so bad that the port of Dover was closed.

It remains to be seen if any action will be taken against the surfer. It would seem unlikely that they will face any action, other than a stern telling off. It would not ben seen as unfair if they were charged with endangering lives or fined for the cost to launch the lifeboat and helicopter. There should have been no valid reason for anyone to attempt to go surfing and they should not expect others to risks their lives to come and save them.

Elsewhere in Kent, there were a number of trees uprooted in the storm of the decade. Yep, we are only 40 days into the new decade, but we are not ashamed to use dramatic statements like the rest of the media. Some train lines were closed due to trampolines trying to escape their confinement in people’s gardens. There were also some minor floods around the county, including under the railway bridge near Harrietsham where a car attempted to drive through the water and became a boat.