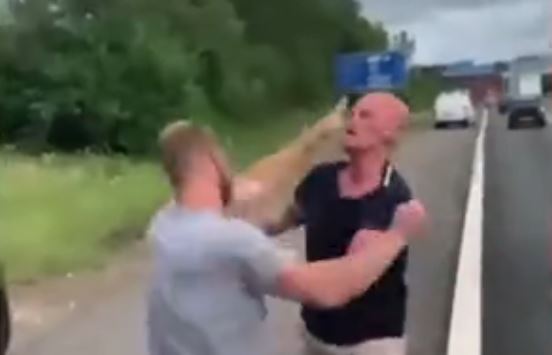 Two louts have been recorded having a fight on the hard shoulder of the coast bound M20 motorway.

The argument began between the drivers of a white van and a Range Rover after what appears to be a road rage incident. Both vehicles stopped on the hard shoulder before a full blown fight ensued. Perhaps the boys were a little too excited heading to the beach for the day to build their sand castles and emotions just got on top of them?

The fight seems to have been recorded by a 3rd party, as he can be heard talking on the video, encouraging the men to ‘get stuck in’ to each other. He then tells one of the men that ‘he is winning’ as he has bloodied the nose of the other man.

There is also a woman present, who seems to be the partner of the Range Rover driver, but she seems to be just as ‘common’ as the two men. The classy lady is heard shounting “go on smash him mate” and can be seen hitting one of the men with her slipper, as she refers to her partner as “Alex”.

At one point the fight almost spills into the outside lane of the motorway and car horns can be heard in the background.

One commentator said that “it’s a shame that these two numpties hadn’t be hit by a HGV, it would have been no loss!”

Kent Police have been contacted for further information, but do not appear have any knowledge of the incident. Perhaps they would like to examine the video, especially as both vehicle registration plates can clearly be seen.

Migrant Boats To Be Turned Around In Channel