HomeNewsInvestigation Into Cause Of Pub Fire Continues
News

Investigation Into Cause Of Pub Fire Continues 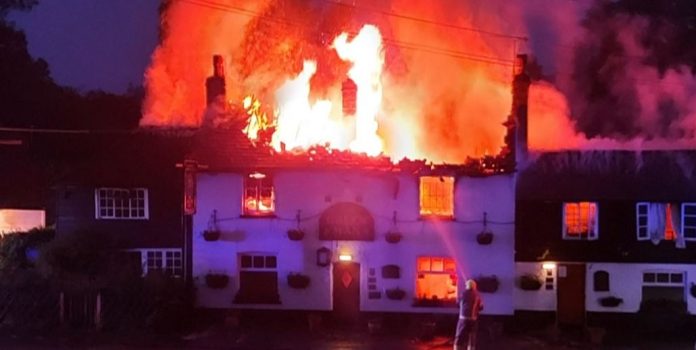 The cause of a devastating fire that destroyed an old pub in Kent is continuing today. The Green Man in Hodsoll Street near New Ash Green was gutted by fire in the early hours of Thursday morning.

The pub has been a mainstay in the village since the 19th Century and is 137 years old. The Tudor building was full of family portraits and heirlooms owned by 33 year old Alex Brooks.

Up to five fire engines were called to the scene around 2am on Thursday 17th June. The pub was well alight by this time and it was too late to prevent significant damage being caused. A local residents swimming pool water was used by the fire brigade to hose down the flames.

Fire investigators are now trying to establish the cause of the fire, although they have already stated that it was an ‘accidental fire’. Local residents have said they think the fire was started by a lightning strike, as there were a number of storms over Kent that night.

Mr Brooks has said that he has recently changed over his insurance, although it is unknown what cover he has and if it will cover all costs of repair of the old building. Sadly the pub will never be the same and some priceless items have been lost forever.

The locals are very upset to have this happen to the pub that has always been present in their lives and there are hopes that the pub will rise from the ashes.