HomeNewsKent Police Cause Outrage By Raising The 'GRT' Flag
News

Kent Police Cause Outrage By Raising The ‘GRT’ Flag 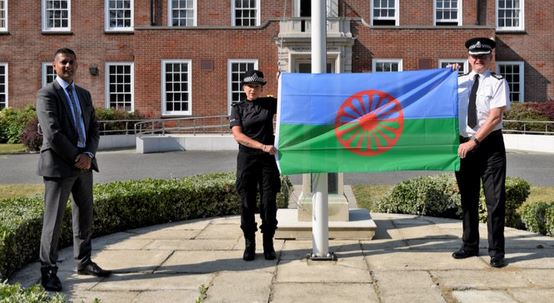 Kent Police has caused anger after announcing that ‘We’re marking Gypsy Roma Traveller History month by raising the ‘GRT’ flag’ on thier official twitter page. An accompanying photo was added showing police officers at a flagpole , whilst holding the ‘GRT’ flag.

The full twitter message, posted on 24th June 2020, said “We’re marking Gypsy Roma Traveller History month by raising the ‘GRT’ flag’, helping to show our continued support for diverse communities. Kent’s history has a rich Gypsy & Roma heritage & we’ll continue to work with all communities to ensure this is a welcoming county for all’.

Social media fans were quick to point out that they felt the gesture was insensitive bearing in mind the court case going on at the moment, where a police officer was killed after being dragged a mile by a car driven by a group of teenage travellers.

the timing of this is not just wrong, it is totally insensitive

On 15 August 2019, 28-year-old police constable Andrew Harper was killed near Sulhamstead, Berkshire, England whilst in the line of duty. Four people were arrested on suspicion of murdering PC Andrew Harper after more than 100 police swooped on a traveller site. Three are currently on trial for the murder of PC Harper. Henry Long, 18, of Mortimer, Reading, and two 17-year-old boys deny murdering the 28-year-old.

Referring to the Kent Police tweet, a twitter user said “You know things are bad when you can’t tell if this is a parody or not”.

Another commented “Is this a joke? We do not pay the police force to support certain groups. They should police without fear nor favour.”

So far, Kent Police have not responded to the criticism.