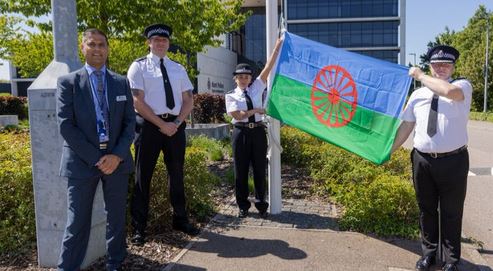 Kent Police have once again raised the Gypsy Roma Traveller flag to mark Gypsy Roma Traveller History Month. The police force are keen to encourage cultural awareness and equality inside and outside the force, working with others to build trust within Kent communities.

Thanks very much, but why so much attention to the Gypsy Roma Traveller community? We have never seen Kent Police raise a flag of anther group or community? Surely, if they want to treat all equally, they should be raising all groups flags or none at all, just in case they discriminate against one group?

Elsewhere in Kent during May, a large group of travellers illegally pitched up on a popular recreation ground in Hythe. The group of about a dozen caravans drove onto Hythe Green on 13th May.

The green should be used for boot fairs, circus and community events and recreation, is owned by Hythe Town Council. Hythe Town Council says they were forced to instruct a solicitor to get the travellers removed.

The statement from the council said “We are aware of the Unauthorised Encampment on Hythe Green and the correct legal proceedings are being followed to remove the encampment from The Green”.

Also, last week, travellers pitched up at a seaside car park in Swalecliffe, after a height barrier had been broken.

There were no police to be seen, they were probably too busy arranging their flag ceremony!

In a final twist, yesterday travellers decided to pull up on the Queens front lawn as they parked up to 30 vehicles outside Windsor Castle. Local police, council officials and Windsor Park wardens were in discussions with the group and they later moved away to another site nearby.