Long Queues For Primark At Bluewater 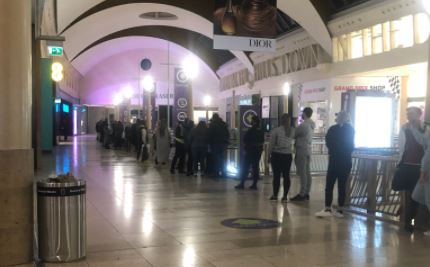 There were long queues at Bluewater yesterday as people anticipated the reopening of their favourite shops.

Non-essential shops across the nation opened their doors on Monday 12th April and some people could not wait to get spending again. Owners of Primark were keen to inflict pain on as many ‘husbands’ as possible, as they extended their hours by opening their doors at 6am and did not close until 11pm.

The queuing system was well organised and gave the budget clothes shop some extra publicity. You would be surprised to hear that there are other shops at Bluewater but no-one gave them a mention – not even us!

As expected, stores have been very busy but we’re more than ready and very confident in the safety measures we have in place

Bluewater bosses were pleased to see the increased footfall as shoppers returned to the centre. They have prepared special queuing lanes and have provided additional signage and hand sanitation stations. They were keen to remind shoppers that face masks are mandatory inside the centre, unless you have a phoney excuse not to wear one.

It has been a difficult year for the Bluewater owners, not because of the pandemic, but because their dream of becoming a major designer fashion outlet has now been taken over by the might of Primark – who would have dreamed that a few years ago. At least if you forget your mask, you can pick up a cheap pair of briefs for 2 quid and use that on your face instead!