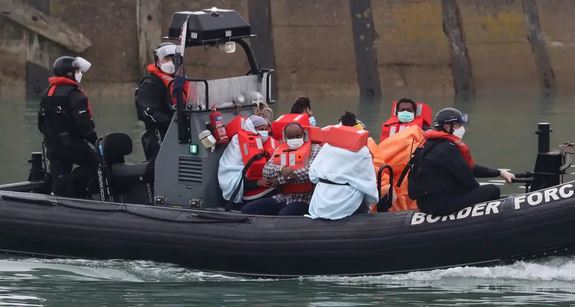 23 migrants arrived in Dover yesterday after they were picked up by the UK Border Force. It brings the number arriving this month to 102 already.

What is even more shocking is that the total for 2021 so far is 1,464, which is a number that the Government have been very careful to conceal.

Yesterdays haul of 23 people comprised of five who had been in a small dinghy and another 18 in a larger craft, who attempted to cross the Channel in calm conditions overnight.

The group, who all appeared to be young men were brought into Dover in life jackets as they were accompanies by the officials. Authorities in France claim to have intercepted at least 49 who attempted to cross last Friday, and then another 98 on Saturday, as the calm weather allowed smaller vessels to attempt the crossing.

France struck a deal with the UK but has so far resisted having dinghies sent back to its northern beaches.

It would appear that the current ‘squalid conditions’ reported by migrants held at the Folkestone Barracks is not enough to deter the flow of migrants to our shores. Home Secretary Priti Patel has unveiled a series of reforms to stop smuggling gangs sending migrants across the water last year and they appear to be working ‘really’ well by these figures!

Miss Patel announced a new plan that border guards patrolling the Channel will be given powers to turn back migrant boats, but it will be dependent on France and other countries accepting the return of migrants – so that’s set to fail then!

With the bill for the UK asylum system is set to rise to more than £1.3billion this year, it would appear that the cronies in Downing Street need to come up with a new plan.