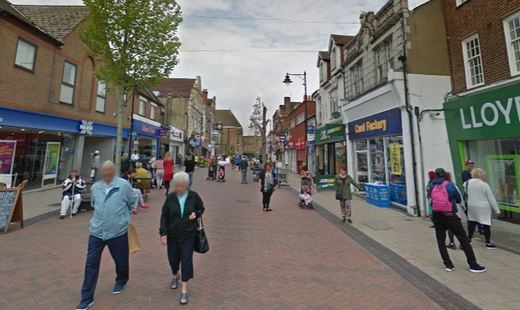 Two street robbers who stole cash from a man while he sat in a taxi have been jailed.

Dean Lacey, 47, and Michaela Whiting, 39, targeted the victim after they saw him withdrawing money from a cash machine in Gillingham and getting into a pre-booked cab.

On Wednesday 7 April 2021 they appeared at Maidstone Crown Court and admitted robbery and were each sentenced to 15 months’ imprisonment.

The offence took place after Lacey and Whiting saw the victim, a man in his 40s, using a cash machine in Gillingham High Street at around 9am on Tuesday 9th June 2020.

The victim withdrew £20 to pay for a taxi which had been arranged to collect him, and his partner, from a nearby street.

As he walked down Sappers Walk, he heard Whiting and Lacey behind him. Whiting could be heard saying, ‘where does he think he’s going?’ Lacey then approached the victim and said, ‘I want what you got.’

A brief confrontation took place before the victim got away and continued towards the taxi, which was waiting to collect him.

Once he was sitting in the rear seat, Lacey leaned into the vehicle and grabbed him around the throat, before reaching into his pockets.

There are no mitigating circumstances for their actions, and I am pleased we have secured justice for the victim

As Lacey was assaulting the victim, Whiting demanded he hand over his bank card. He eventually gave them £5 but refused to give any more money.

Whiting also searched a bag, belonging to the man’s partner, and removed some medication before both offenders left the scene. She later admitted the theft, in addition to the robbery.

Officers reviewed CCTV, which captured the offence, and identified Lacey and Whiting as the two offenders. They were detained at their Railway Street home two days later.