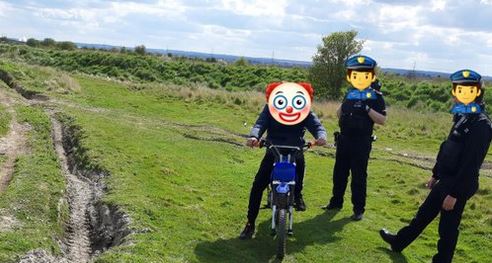 Kent Police have spent a week on patrol on Rushenden Marshes in Swale this weekend.

The action was conducted to target nuisance off-road vehicles that have been plaguing the area. These include scramble bikes and also off-road quads.

The weekends action resulted in several encounters with offenders and a section 59 being issued.

Section 59s are issued in situations where

“an officer has reasonable grounds for believing that a motor vehicle is being used in a manner which contravenes Road Traffic Act Section 3 (Careless Driving) OR Section 34 (Driving elsewhere than on a road) AND also the manner of use of the vehicle is causing or has been causing or is likely to cause, alarm distress or annoyance to members of the public”.

Although it is fantastic news that they managed to issue a section 59, it would appear that more could have been issued after they spoke to several offenders.

Locals will be hoping that a ‘talking to’ will be enough to keep offenders away from the marshes, so that they can be used for walkers and wildlife observers.

There is clear joy from locals regarding this police action, as someone was quick to comment “This is why people can’t get hold of them for break-ins then as they are out the back of the marshes stopping kids having fun, well done police academy!”.