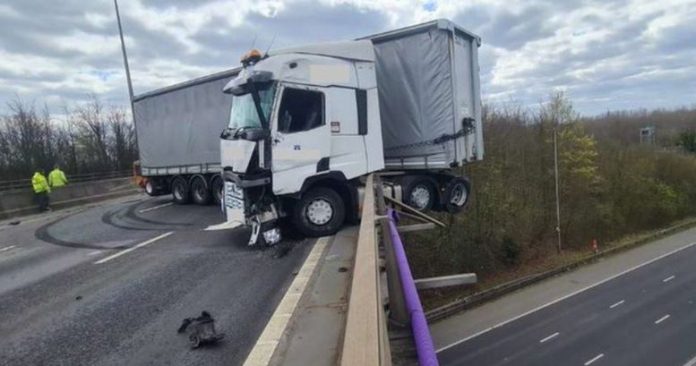 Thanks to the driver trying to replicate a scene from the Italian job, the M25 was closed anti-clockwise at junction 2 south of Dartford, Kent, and the A2 was shut in both directions.

Highways England said a “complex recovery and repair operation” was under way and the roads would be closed for some time.

Kent Police said the driver was not seriously injured, but there was a good chance they could be once someone from Highways England got hold of them!

The crash in which part of the lorry’s trailer went through the safety barrier on the bridge was reported to Kent Police at about 1:20pm. The strange do-nut shaped skids marks on the road has left investigators scratching their heads as to what the driver what actually doing at the time of the crash. It would appear that one of the tyres blew out, causing the driver to lose control..