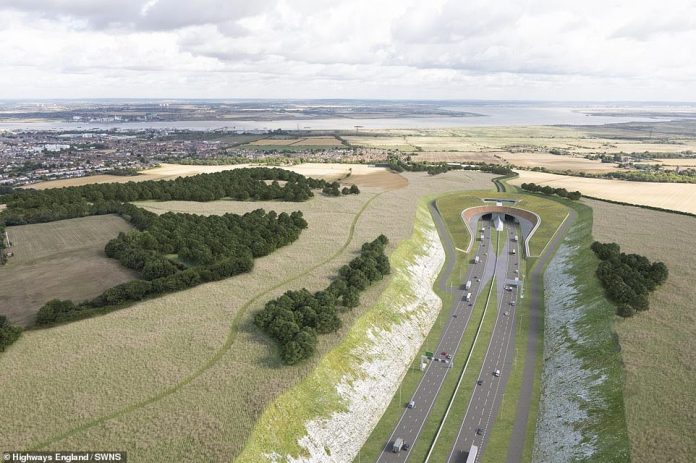 Highways England have released images of the proposed Lower Thames Crossing after consultation with the public. The tunnel is planned to run for 2.5 miles under the Thames and offer another link between Kent and Essex.

The project has a projected cost of £6.8bn and if it is anything like HS2, will probably end up nearer to £30bn. The original plan stated that it will take 10 years, but Highways England are stating it could be ready by 2025.

The new road will cover 14.3 miles and Highways say it will have a speed limit of 70mph. By the time it is opened, that will no doubt, be reduced to 50mph and they will convert it to a smart motorway “to save space”.

There have been a number of amendments to the first plan after detailed analysis of the 29,000 responses. They ignored the 28,500 responses from locals who do not want their communities ripped apart with another motorway.

Updates to the design include an extension to the southern tunnel entrance, to move the road away from nearby properties and reduce the impact of protected bird habitats in the Marshes and Thames Estuary. Some slip roads have been redesigned to improve safety at junctions and make the project more visually appealing. Not sure if it is possible to make a road ‘more visually appealing’? Also, one lane southbound between the M25 and A13 junction will be removed to reduce the number of people leaving Essex.

There is a further public consultation planned to take place now the new images are on display. Once the consultation closes on 25th March, Highways England will ignore any new responses before finalising its plans to seek planning consent for the project, via a Development Consent Order (DCO).

As part of the DCO application, Highways England will submit a consultation report, explaining how the issues raised during both consultations were considered and then lost due to an epic email server failure. They will then plough on with their plans regardless.