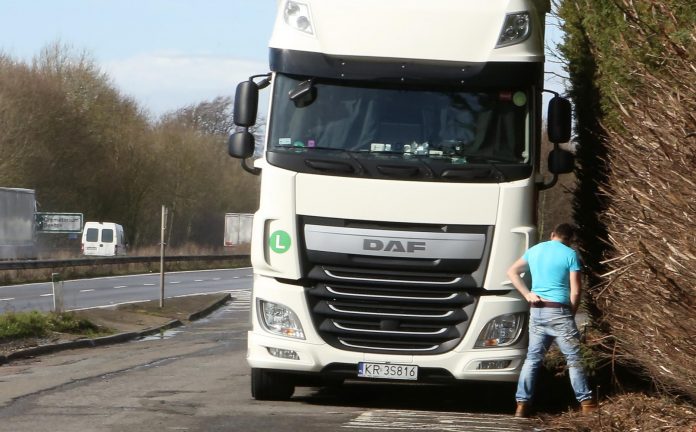 There is a growing concern across the County as more and more HGVs use laybys as overnight parking. This menace has bene on the increase and is widespread across the country, but more prevalent in Kent as trucks head for Dover.

Truck drivers are limited to how many hours they can drive before they are required to take a break. As there are no designated HGV parking areas, other than at motorway services, HGVs are using laybys and any other hardstanding to park up.

In some instances, there are so many HGVs that there is no room remaining for anyone else to stop. Womens groups are complaining that it is now too dangerous for them to stop in these area. Not only is there a safety issue but also one of hygiene, as there are no washing or toilet facilities. Drivers are using the verges as their toilets which makes it awfully unpleasant for anyone else to use .

Another issue is foreign HGV drivers using our laybys for their “long weekends” on British roads to get around strict French and Belgian rules on rest periods.

Under EU rules, lorry drivers must take a weekly break that averages 45 hours. Both France and Belgium have banned drivers from taking these breaks in their cabs, amid fears that poorly paid eastern European truckers are living in their lorries for months at a time, taking jobs from local drivers and causing parking problems. For example, truckers caught in Belgium taking their long break in their vehicle can be hit with a £1,500 fine.

The British never enforced such a ban and now we have left the EU, chances are that our laws could be different soon anyway. It is about time there was a law that stopped HGVs parking whereever they want, unless they are on a break of less than one hour.

There is not much that the majority of Kent people can do to stop this problem and we would not advise anyone to approach these drivers on their own. Until the authorities decide to deal with this problem, the only people can do is to hoot your car horns every time you pass a truck with its curtains pulled. Once drivers start to realise that they are not going to get a decent sleep, they may decide to find another place to stop next time.